A 61 year old mail presented for repair of a hiatal hernia for symptomatic GERD via a laparoscopic approach and LINX placement.  The patient had a history of HTN, hyperlipidemia and CAD with stents placed in 2013 and 2016.  He was no longer on any anticoagulants and had a negative stress test 9 months previous.  The patient stated that he was in his usual state of health at the time of surgery with no chest pain, limitations of activity due to shortness of breath, or otherwise.  The patient was otherwise active capable of doing more than 4 METS of work.

The patient was induced in the usual fashion and provided GETA with desflurane.  The anesthetic was complicated by severe hypotension and bradycardia when placed in reverse T-burg at the beginning of the case which was treated with glycopyrrolate (0.2mg) and ephedrine 15mg in 5 mg increments.  Aproximately 45 min into the case the patient developed tachycardia of 109 or so BPM and this was treated with a bolus of 100 mcg fentanyl and esmolol 30 mg.  Towards the end of the case the patient developed significant hypotension again and this was treated with a very small dose of phenyephrine given via slow drip.

The surgical time was a little over one hour. The patient emerged from anesthesia without complications, was extubated in the OR and taken to PACU in excellent condition. The patient appeared comfortable and care was transferred to the PACU nurse.  After approximately 30 min I went back to see how the patient was doing.  He appeared comfortable, sleeping in bed.  I finished my paper work and signed out to the nurse and headed for the door.  About 10 min later as I had just pulled out of the facility I was called by the nurse stating that the patient was having chest pain and his EKG tracing appeared abnormal.  The nurse told me she had already ordered and EKG.  I asked her to call me with results.  I was called about 5 min later by a panicked nurse stating the patient's EKG showed a STEMI.  The ER doc had already been called and given them orders to begin a code STEMI. Patient was transferred to a nearby hospital for further care where an occluded stent was encountered and treated with stenting. 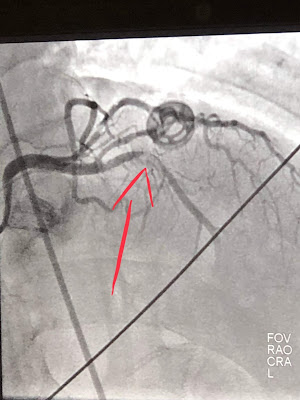 This is a picture of the patients lesion prior to a stent being placed.


The patient in this case report complained of chest pain. Unfortunately, 100% of patients experience chest pressure and pain after lapx hiatal hernia repair. So this complaint is non specific. 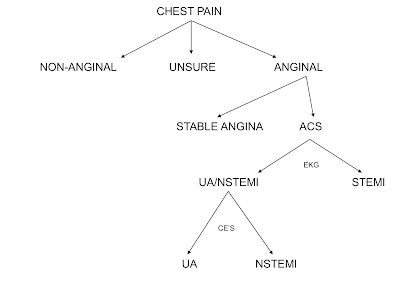 In our case, we had ST elevation in the septal, anterior and lateral leads. 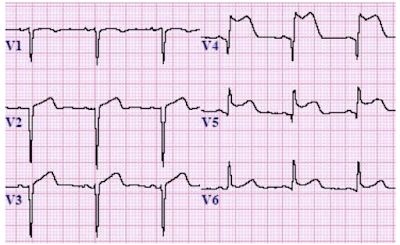 Above is an example of anterolateral STEMI with some septal involvement (V2).

Prior to surgery, the risk for a major adverse cardiac event (MACE) in this patient can be estimated using the revised cardiac risk index (RCRI):


The RCRI has a moderately good ability to discriminate patients who will develop cardiac events from those who will not after mixed noncardiac surgical procedures (area under the curve [AUC] 0.75), it is less accurate in patients undergoing vascular surgical procedures (AUC, 0.64), and it is less able to predict all-cause mortality (median AUC, 0.62). Recently a published geriatric sensitive RCRI performed better on patients over age 65 than the original RCRI [2].

To overcome these limitations of RCRI, the National Surgical Quality Improvement Program (NSQIP) score was developed and validated on 211,410 surgical patients. This model includes age, ASA class, functional status, abnormal serum creatinine, and a novel and more appropriate organ-based categorization of surgery. Risk may be quantified by a risk calculator on the Internet. The discriminative or predictive ability of the NSQIP score is significantly better as compared with RCRI (AUC, 0.88), and it works well also in vascular surgical patients.  The NSQIP calculator is very labor intensive making it somewhat impractical to use by the bedside clinician.  However, I input the data from this case into the   online calculator available for free. The result indicated that the patient was at less than 1 % risk for cardiovascular complications.

The preop EKG in patient's with cardiac disease

ECG abnormalities are not part of either the revised cardiac risk index (RCRI) or the National Surgical Quality Improvement Plan (NSQIP) because of the lack of prognostic specificity associated with these findings.

The rationale for obtaining a preoperative ECG comes from the utility of having a baseline ECG should a postoperative ECG be abnormal.

Subjective assessment of cardiopulmonary reserve (i.e. evaluation of METs) prior to surgery suffers from poor sensitivity (i.e. falsely labels high risk patients as low risk).  Therefore, in patients with more than 4 METs where there is an otherwise high index of suspicion for disease, a low threshold for further evaluation should exist.  On the other hand, patients with a low MET score (i.e. inability to engage in activities equivalent to at least 4 METs) is very good at predicting a patient at higher risk. However, this method is also not used in the formal scoring systems for predicting post operative cardiac risk.

On UpToDate, a summary of the preoperative approach to cardiac evaluation includes the following general principles:

●
●We use either the revised cardiac risk index (RCRI), also referred to as the Lee index, or the American College of Surgeons National Surgical Quality Improvement Program (NSQIP) risk prediction rule to establish the patient’s risk.
●We obtain an electrocardiogram (ECG) in patients with cardiac disease (except in those undergoing low-risk surgery) in large part to have a baseline available should a postoperative test be abnormal.
●For patients with known or suspected heart disease we only perform further cardiac evaluation (echocardiography, stress testing, or 24-hour ambulatory monitoring) if it is indicated in the absence of proposed surgery.

In a 2007 study, it was found that the only preoperative EKG abnormality that was predictive of post op MI was a bundle branch block (right or left).  However, this abnormality did not improve prediction beyond risk factors identified in patient history.

In the immediate post operative period anticoagulation may be contraindicated for treatment of ACS.

There are two main types of MI that anesthesiologists are likely to encounter in the preoperative period: Type I MI and Type II MI.  A type I MI occurs when a thrombus forms with a plaque rupture in a coronary artery  and causes acute obstruction to blood flow. Type II MI occurs when there is a demand supply imbalance of oxygen. In general, the literature suggests that both types can occur in the preoperative period with a frequency that varies largely based on the reference study.  In one angiographic study, nearly 50 percent of patients with perioperative acute coronary syndrome had evidence of plaque rupture [3]. However, in this case presentation, the patient had what could be called a type 4b MI (stent thrombosis). In a recent retrospective study, Helwani et al. [1], showed that 72% of post operative MIs were Type II, while 25% were of type I (acute plaque rupture). They also found an event rate of 2.1% for type 4b (stent thrombosis). 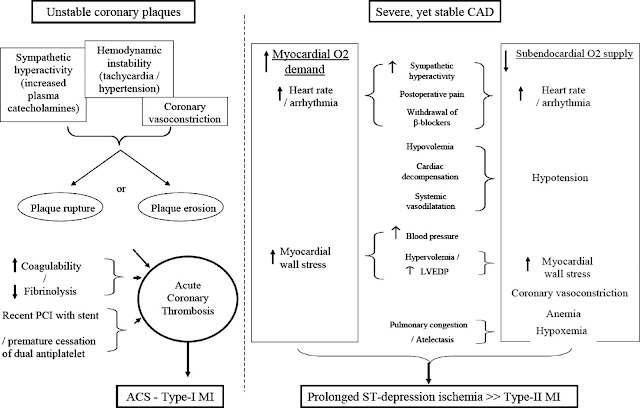 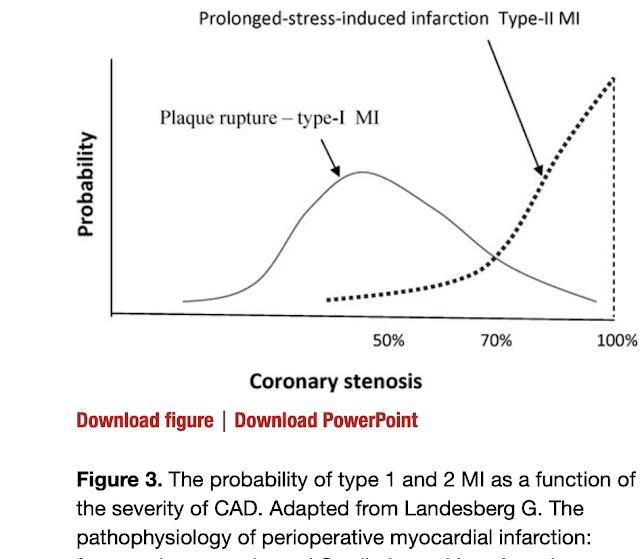 Type 4b MI, or stent thrombosis, is a greater risk shortly after stent placement.  Recommendations currently state that dual antiplately therapy should continue for 30 to 45 days after a bare metal stent because the stent undergoes reendothelialization quickly.  In the updated guidelines of 2016, the period of mandatory DAPT after a second generation DES has been shortened to six months for patients with stable CAD.   These second generation DES appear to be much safer when it comes to stent thrombosis. Even newer DES are pushing the window back even further to only 1 month. However, experts are recommending that aspirin therapy be continued into the operative period whenever possible.  The last time a stent had been placed in the above patient was 2016 and therefore, the patient was not required to continue DAPT during the surgical period.

Mortality from myocardial infarction (MI) after noncardiac surgery[2] is believed to be 10 to 15%. High-risk patients experience perioperative MI 3.0% of the time.

Once a diagnosis is made management consists of the following general themes:


* There is some evidence that hyperoxia in patients with STEMI may not be beneficial, but rather harmful [3]. In an RCT, patients given supplemental oxygen in the prehospital treatment of STEMI, had an increase in infarct size at six months after diagnosis of MI.

In the PACU, the patient was given IV heparin 1000 units, nitroglycerine infusion for elevated blood pressure, and aspirin to chew (325mg).  The treatment of ACS with ST elevation generally includes immediate (less than 2 hours) cardiology consultation for PCI, which is what occurred with my patient. A stent was placed and the patient was discharged home on POD #2 in good condition.

Lastly, in patients who are considered at risk of MACE in the perioperative period, it might make sense to use a volatile anesthetic as the major component of anesthesia due to the proven ability of these agents to condition cardiomyocytes (as well as neurons) against ischemic damage.  The mechanisms behind anesthetic preconditioning relate to reduction in inflammation, cytokines, and a cascade of enzymes that prevent ischemic reperfusion damage. 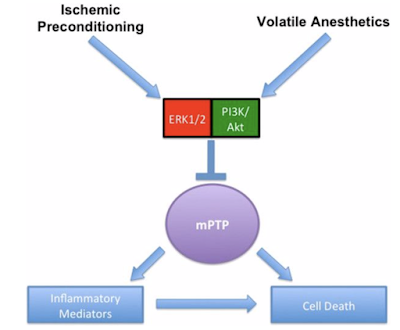 A meta-analysis of randomized clinical trials involving 1922 patients undergoing cardiac surgery showed that, in comparison with total intravenous anesthesia (TIVA), desflurane and sevoflurane achieved significant reductions of myocardial infarctions [2.4% in the VA group vs 5.1% in the TIVA group, odds ratio (OR) 0.51] and all-cause mortality (0.4% vs 1.6%, OR 0.31) [4].  Furthermore, an international consensus conference provided expert opinion support for the use of VA in hemodynamically stable cardiac surgery patients [5] as a means to reduce myocardial damage and death. The pre conditioning affect appears to be dose dependent, and benefits are typical found at a usual clinical dose of 1 MAC.

This case highlights that patient coming to surgery with apparent low risk (RCRI of 1 pt = 0.9% risk of MACE) are still vulnerable and a high index of suspicion is required so that if a MI type 4b occurs, rapid transfer to the cath lab will occur for definitive therapy. Anesthesiologists need to be aware of and ready to institute the first line of therapy in preparation for PCI which includes beta blockade, anti platelet agents (asa), nitro as tolerated and pain control with morphine or an equivalent.