On a Saturday call I was called in to take care of a 72 year old gentleman who had undergone a six hour paraesophageal hernia repair and extensive lysis of adhesions 10 days prior.  He was now suffering from abdominal pain with radiological studies that showed extensive colon dilation with stool and lack of movement from the stomach to the duodenum leading to a diagnosis of gastric outlet obstruction.  The patient had an NG tube in place which was on suction.  The patient was alert and orientated able to answer questions with no signs of obtundation or lethargy.

Lab values were significant for the following:

Gastric outlet obstruction is typically considered a medical emergency not a surgical emergency as serious electrolyte abnormalities are typical along with significant alkalosis if not treated.  The standard textbook presentation of gastric outlet obstruction (GOO), is a dehydrated patient with a metabolic alkalosis, hypochloremia, hypokalemia and hyponatremia.  Initially, the kidneys will dump bicarbonate into the urine to avoid serious alkalosis and retain chloride ions. However, this process is overwhelmed as dehydration ensues.  At this point, the kidneys agressively attempt to retain fluid by holding onto sodium at the expense of secreting potassium and hydrogen ions.  This leads to a paradoxical acidic urine and further exacerbates the alkalemia and hypokalemia.  Alkalosis leads to a reduction in circulating calcium levels. This patient, despite a diagnosis of GOO, did not have the typical biochemical abnormalities associated with this syndrome.

Firstly the patient had significant hypernatremia (Na greater than 144 mmol/L).  Clinically, the sensation of intense thirst that protects against severe hypernatremia in health may be absent or reduced in patients with altered mental status or with hypothalamic lesions affecting their sense of thirst and in infants and elderly people. Non-specific symptoms such as anorexia, muscle weakness, restlessness, nausea, and vomiting tend to occur early. More serious signs follow, with altered mental status, lethargy, irritability, stupor, and coma. Patients with chronic hypernatremia (hyperosmolar states) have adapted their brains via "idiogenic osmoles" to avoid neuronal shrinkage.  Idiogenic osmoles are organic molecules such as myo-inositol, taurine, glycerylphosphorylcholine, and betaine which are accumulated via extracellular fluid uptake via activation of sodium-dependent cotransporters.  Because of this adaptation to chronic hypernatremia, rapid correction of the free water deficit would result in rapid cerebral edema due to the relative hyperosmolarity inside the neuron.
In a systematic review, hypernatremia has been found to be associated with increased 30 day mortality and morbidity [1]. Hypernatremia may result in severe metabolic derangements, myocardial depression and injury, neurologic impairment, venous thromboembolism, and poor wound healing. Although there is an association, it is not proven that preoperative treatment of hypernatremia will improve outcome.  It is clear that the rate of change in sodioum levels is very important.  One study showed that slow rates of improvement (less than 0.25 mmol/L/hr) were typically inadequate with a 3-fold increased risk of 30 day mortality compared to those with a more rapid rate of correction (0.25 to 0.5 mmol/L/hr). 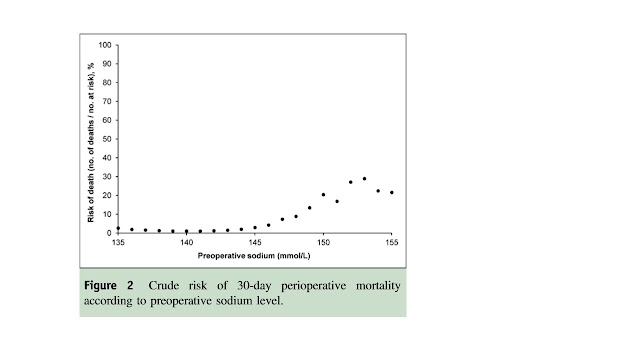 The most likely reason for this patient's hypernatremia was loss of hypotonic body fluids with addition of hypertonic TPN. Rapid and aggressive fluid volume replacement should have been started immediately to correct his likely volume deficit.    Also, the free water deficit needed to be replaced.  The formula to determine the free water deficit (L)=[0.6 x IBW] x [(current [Na+]/140)-1]. The deficit should be corrected in the short term by 1/2 or 50% of the deficit with the remainder corrected over the next 24 to 36 hours to minimize cerebral edema.

The Adrogue Formula will allow you to determine how much the serum sodium level will change based on the fluid you infuse:  Change in serum Na+= (infused Na+ - serum Na+)/(TBW +1).  For my patient using 1/2 NS and plugging in the data, the expected change in serum sodium after the six hour case was (75 - 150)/(0.6 x 70kg)+1 = 1.74 mmol.  If my target is to reduce the serum sodium by about 0.3 mmol/hr, after 6 hours (approximate length of the case), I would want to have reduced the serum from 150 mmol/L to 148.2 mmol/L.  It turns out that I didn't use the above formulas, nor make the calculations listed above. I guestimated that giving 1 L of 1/2 NS would be safe and help reduce to some degree the amount of hypernatremia.  It turns out that the 1 L of 1/2 NS I infused over the six hour procedure was predicted to reduce the serum sodium by 1.74 mmol/L and my goal based on the above equations was to decrease it by 1.8 mmol after six hours.
In retrospect, I do not believe the goal should be focused at all on reducing serum sodium when taking a patient with chronic hypernatremia who is not suffering any symptoms, into major abdominal surgery.  This was likely an error of judgement on my part.

In fact, the patient also had LR infusing, and this was contributing to the reduction in Na+ as well.  I infused 3.5 L of LR and the estimated reduction in serum sodium from this therapy would be (130-150)/42+1 =  0.46 mmol/L x 3.5 L = 1.62 mmol total. This shows that I actually overshot my goal by using LR aggressively during the case. Therefore, when facing a patient with likely chronic hypernatremia undergoing major abdominal surgery, the best therapy is to use LR as needed.

My patient also suffered from hypomagnesemia. Magnesium (Mg2+) plays a major role in a number of pathways in the human body including serving as a co factor for a number of processes (i.e. protein synthesis, neuromuscular function etc.), is an endogenous regulator of several electrolytes, in particular it is a  calcium channel antagonist. In addition, Mg2+ is important in maintaining Calcium levels because low levels of Mg2+ result in end organ resistance to parathyroid hormone and in parathyroid secretion.  Furthermore, Mg2+ also modulates sodium and potassium currents thus affecting membrane potentials.  In the CNS, Mg2+ exerts depressant effects by antagonizing the NMDA receptor and also inhibiting catecholamine release.

Magnesium levels are primarily affected in the small bowel via absorption (passive and active transport) and re absorption in the thick ascending limb of the loop of henle.
Hypomagnesemia results mainly from inadequate dietary intake and/or GI and renal losses.  Hypomagnesemia is often associated with diarrhea, vomiting, use of loop and thiazide diuretics, ACE inhibitors, cisplatin, aminoglycosides,or other nephrotoxic drugs, and several endocrine like parathyroid diseases, hyperaldosteronism, and chronic alcoholism.  In addition, during major abdominal surgery, intraoperative crystalloid infusion may lead to a decrease in the passive magnesium transport, thus leading to a decrease in plasma magnesium concentrations.  The incidence of hypomagnesemia is as high as 65% for patients in the ICU, where hypoalbuminemia, TPN, and the use of magnesium-wasting medications are commonly present.  Patients with head injuries also seem to be at high risk for hypomagnesemia secondary to polyuria.  Hypokalemia and hypocalcemia are also frequently associated with hypomagnesemia.
There has been an effort to associate hypomagnesemia with increased mortality. Several studies have been able to link the two, however, careful analysis and high quality studies have suggested that hypomagnesemia may be an epiphenomenon of critically ill patients who suffer increased mortality.  Therefore, treating low magnesium levels is not likely to reduce mortality.  However, replenishing magnesium levels in surgical patients can have other benefits.  For example, reduction in cardiac dysrhythmias, primary atrial tachyarrhythmias, reduced anesthetic need (MgSO4 as an adjunct anesthetic/analgesic) inhibition of platelet dependent thrombosis, attenuate adverse cardiovascular effects during laryngoscopy, and intubation.  The treatment of hypomagnesemia takes several days of IV therapy because nearly all magnesium is intracellular.  In fact, in critically ill patients, 4 to 6 grams of IV Magnesium per day will likely be required to maintain a serum magnesium level of near 2 Gm/dL. In addition, IV magnesium can take up to 48 hours to redistribute into the cells, causing serum levels after IV administration to falsely elevated.

The patient was also suffering from hypophosphatemia.  Hypophosphatemia is a very common disorder in critically ill patients occurring in up to 100% of patients in some studies.  Particularly relevant to this patient, TPN can result in sudden and profound hypophosphatemia.  This usually is due to providing TPN to patients who are malnourished, have initial low phosphate levels and then suddenly receive glucose via TPN which supports a sudden increase in the formation of ATP.  With TPN initiation, a sudden acute rise in glucose transport across cell membranes occurs accompanied by oxidative phosphorylation resulting in a large demand on intracellular phosphate for support of ATP production.  This results in "refeeding syndrome" where rapid changes in fluids and electrolytes occurs.  Commonly, this changes result in hypophosphatemia, hypomagnesemia and hypokalemia.  Low phosphate levels can have wide ranging clinical effects including myocardial dysfunction, diaphragmatic weakness, seizures, coma, rhabdomyolysis, and red blood cell dysfunction from tissue hypoxia (by decreased RBC 2,3-DPG).  Furthermore, there is some evidence that hypophasphatemia is associated with longer ICU and hospital stays and increased risk of arrythmias. A recent retrospective analysis found that hypophosphatemia was associated with increased 28 day mortality in the ICU [2].  The authors of this study concluded based on their analysis that independent of illness severity, hypophosphatemia still resulted in increased mortality. This patient had significant hypophosphatemia, and I elected to replace phosphate during the case.  It is important to consider the calcium levels of patients who receive phosphate repletion because the calcium level will likely decrease as phosphate is replaced.
My patient went to the ICU intubated post op.  No problems were evident related to his severe electrolyte abnormalities.  He required prolonged post operative care in the ICU with mechanical ventilation. However, after about two weeks he was extubated and made progress.

Memorizing the dosing of all electrolyte replacements is tedious and unnecessary. I have included a simple calculator that can be stored on one's home screen of their smart phone for easy use to determine the appropriate dose to give a patient assuming IV administration.