59 year old female for D&C and hysteroscopy with a history of pituitary adenoma, empty sella syndrome, Adrenal insufficiency, HTN, OSA, and BMI of 31. The patient was taking cabergoline to inhibit the secretion of prolactin via agonism of dopamine receptors. The patient also had a history of PONV and was very concerned with this prior to surgery.

The patient had been followed for several years for her pituitary adenoma and had had no recent changes in her medical status.  I verified that her labs were within normal limits and proceeded with a general anesthetic with LMA.

The pituitary gland occupies the sella turcica of the sphenoid bone at the base of the skull, the roof of which is created by an incomplete fold of dura, the diaphragma sella, through which passes the pituitary stalk.

The posterior pituitary is regulated directly by the hypothalamic axons which project to it and synapse with its cells. The anterior pituitary is regulated by hypothalamic tropic hormones that reach it via the portal venous system. The hypothalamic influence is mainly stimulatory, which is in turn regulated by negative feedback control exerted at the pituitary and hypothalamic level, the classical example being the feedback regulation of thyroid-stimulating hormone (TSH) by the thyroid hormones
There are two main categories that facilitate tracking the practical considerations of approaching a patient with a pituitary adenoma. Macroadenomas (>10mm) and microadenomas (<10mm).   Larger tumours can cause hypopituitarism, cranial nerve palsies, and hydrocephalous due to blockage of third ventricle outflow. Microadenomas may present with symptoms of hormonal excess, the classic example being Cushing's disease [excess of adrenocorticotropic hormone (ACTH)] or very rarely thyrotoxicosis (excess of TSH).
The three most common hypersecreting hormonal syndromes from pituitary adenomas include:
1) Acromegaly: 20% of pituitary adenomas. These are  macroadenomas secreting excess GH resulting in a constellation of comorbidities.
Patients coming to surgery with this type of tumor will be on medications to inhibit GH production such as Somatostatin analogues, Octreotide, lanreotide or GH receptor antagonist (Pegvisomant).
2) Cushing's disease:  A pituitary corticotroph adenoma secreting excess ACTH. These represent about 7% of pituitary adenomas. These patients may arrive to surgery taking ketoconazole, metyrapone, mitotane, or aminoglutethimide. These medications inhibit the enzymes in the adrenal gland that make up the chain of synthesis of cortisol and therefore, are able to reduce hypercortisolemia.  Patient's may be arriving to surgery to undergo bilateral adrenalectomy which is required for non resesectable ACTH hypersecreting microadenomas. These patients often suffer from HTN, DM and osteoporosis (40% of patients).
In particular, patients with Cushing's disease may present with hypokalemic metabolic alkalosis. Hypokalemia occurs due to overwhelming of the enzyme 11-beta-hydroxysteroid dehydrogenase by excessive circulating cortisol, resulting in inappropriate activation of the mineralocorticoid receptor.  This receptor allows for retention of sodium at the expense of spilling potassium and hydrogen ions into the urine at the distal convoluted tubule of the kidney.
3) Prolactinoma: Medical therapy is first line with bromocriptine or cabergoline (inhibit prolactin secretion). These medications will often resolve hyperporlactinemia and reduce tumor size.  There are no perioperative care issues caused by the physiological affects of prolactinomas. These tumors are far more common in females. In men, they are often macro adenomas.
Hormone Hyposecretion
1) Adrenal cortical insufficiency: This is also known as secondary adrenal insufficiency and differs from Addison's disease in that the electrolyte disturbances are less severe. In the perioperative period IV hydrocortisone along with IV normal saline +/- IV glucose is indicated for support to avoid hypotension.
As cortisol is produced in the adrenal cortex in the zone fasciculate via stimulation from ACTH, in some rare cases (i.e. pituitary apoplexy), the pituitary gland is rendered incapable of producing ACTH. While in secondary adrenal insufficiency the sodium and potassium are often normal, although in some instances, a dilution hyponatremia develops due to excess ADH secretion from absence of cortisol.  Dehydration and hyperkalemia are typical of primary adrenal cortical insufficiency due to faulty aldosterone secretion as well.  However, aldosterone is not primarily under the control of the PG, and therefore, not typical of secondary adrenal insufficiency. 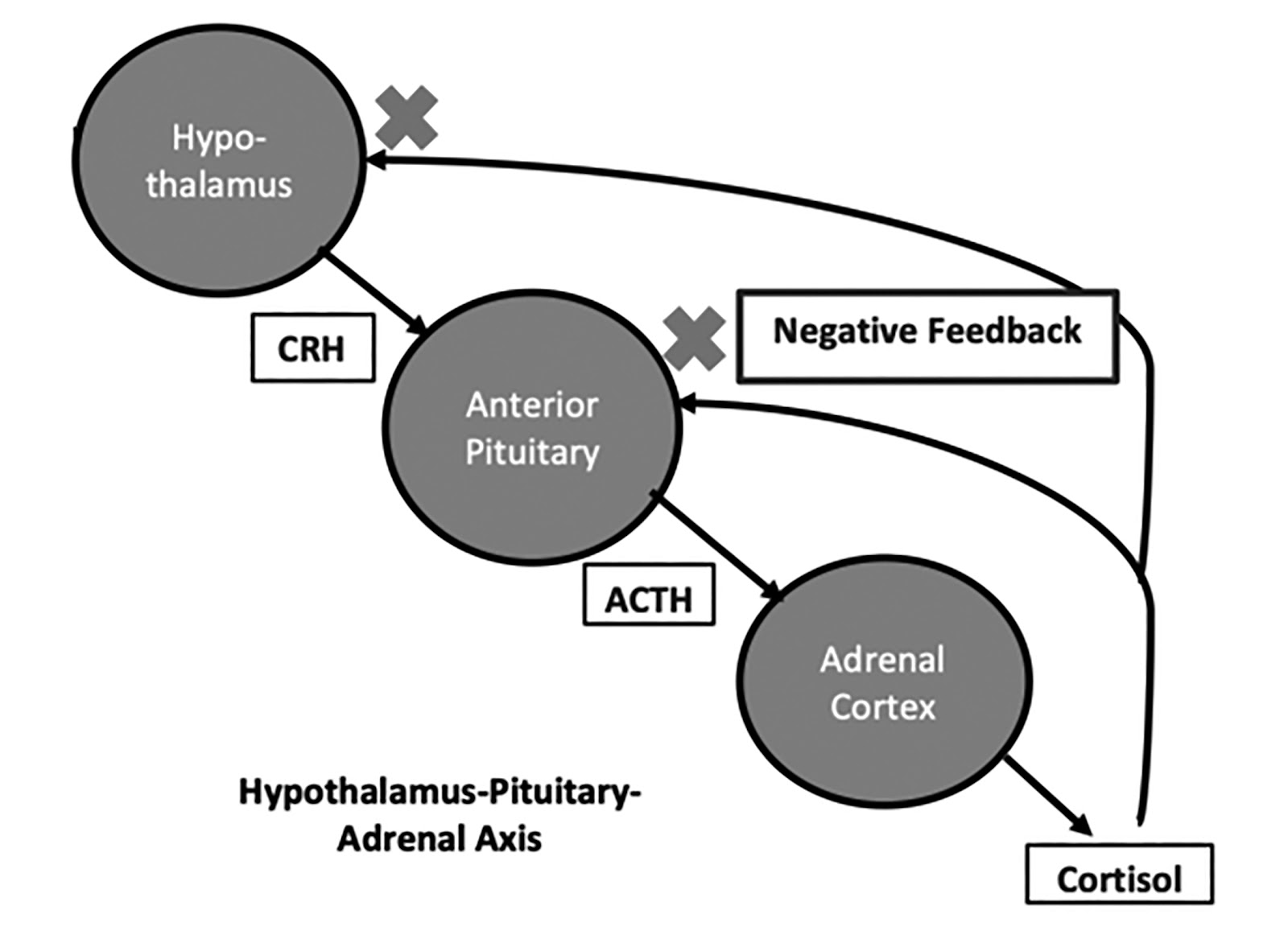 In cases of addisonian crisis from secondary adrenal insufficiency as seen from a PG problem can be treated with dexamethasone 8 mg or hydrocortisone.  Since in secondary adrenal insufficiency aldosterone is adequate, the mineralocorticoid effects of hydrocortisone are not critical, and a pure glucocorticoid such as decadron is adequate for treatment.  However, NS should be infused as well, as opposed to LR, as hyponatremia may accompany this syndrome from SIADH.
2) Hypothyroidism:  Pituitary hypothyroidism tends to be less severe than primary thyroid failure. However, patients will be more sensitive to and less able to metabolize anesthetic medications. This can result in induction of anesthesia with very low dosages as well as prolonged sleep after discontinuation of anesthetic medications.   Clinical response to thyroid replacement therapy may take 10 days, although more rapid correction can be achieved with i.v. L-iodothyronine (T3). Unfortunately, there is a significant risk of precipitating myocardial ischaemia and heart failure.  Furthermore, Thyroid hormone replacement has to be done very cautiously in patients with impaired adreno-corticotrophic hormone ACTH reserves as it can precipitate an adrenal crisis. Therefore, glucocorticoid cover is essential before proceeding with thyroid hormone replacement.
3)  Central Diabetes Insipidus:  Far less likely to be encountered in the perioperative period. The result of failure of secretion of ADH. It is treated with desmopressin, a synthetic analogue of ADH that has a longer half life and which lacks the vasoconstricting properties of the endogenous hormone. Although desmopressin is usually administered orally or intra-nasally, after operation it can be given as a subcutaneous or intra-muscular injection. Failure to secrete oxytocin only becomes clinically evident during and after childbirth, and is not relevant in the acute setting.7
Surgical stress and hormonal changes
Opioids can suppress the hypothalamic and pituitary hormone response to surgery.  However, to cause complete suppression, very large doses are required (i.e. ~50 mcg/kg).
Acute IV opioid administration can have a stimulatory effect on prolactin secretion mediated by the mu-,Kappa-, and sigmoid opioid receptors in the hypothalamus.  In cases of prolactinemia induced by opioids, bromocriptine has been used successfully to decrease prolactin levels.
This patient was taking cabergoline a dopamine 2 receptor agonist.  Cabergoline has been found to be effective in 80% of women with prolactinomas.  Bromocriptine has lost favor mainly due to pharmacokinetic issues where it is required up to 3 or 4 times a day.  Cabergoline is long acting requiring dosing as little as twice a week. It is important to note that PONV can be affected by stimulation of D2 and D3 receptors. Antagonism of these receptors may decrease PONV. The mechanism involves blocking adenylate cyclase to reduce the amount of cAMP in neurons in the nucleus tractus solitarius and area postrema.  Commonly used D2 antagonists include reglan, and a newer agent name Barhemsys (amusulpride).  In this patient with a concern for PONV and taking a D2 receptor agonist that was long acting, rescue treatment with any D2 receptor blocker may prove less effective.  Therefore, with the patient's permission a scopolamine patch was placed on the skin prior to rolling into the operating room.  Opioids were minimized, ketorolac was provided to reduce opioid requirements, dexamethasone 4mg and zoltan 4 mg were given as prophylaxis. The patient did not experience any PONV. If the patient had required rescue therapy, promethazine was ordered for rescue.  Barhemsys is a newer alternative which has been shown to be moderately effective for rescue therapy in patients who have already received prophylaxis.  Unfortunately, Barhemsys is a D2/3 antagonist which presents two potential concerns in this patient. 1) it may not be able to bind to the D2 receptor given the presence of cabergoline (d2 agonist). 2) It can induce increased prolactin levels in normal patients.  However, it is not clear at all, that this would be a problem in a patient who is already properly treated with cabergoline.
Pituitary adenomas represent a potential large constellation of syndromes and diseases processes.  A careful understanding of the type of adenoma along with its included pathophysiology is important prior to providing anesthesia. Fortunately, most pituitary adenomas are prolactinomas which tend to be benign and very responsive to medical therapy with dopamine 2 agonists.  It must be recognized that alternative pharmacotherapy for PONV must be considered as the d2 agonist in these patients will likely make antagonism of the D2 receptor impossible.
Posted by Rex Russell at 3:13 PM